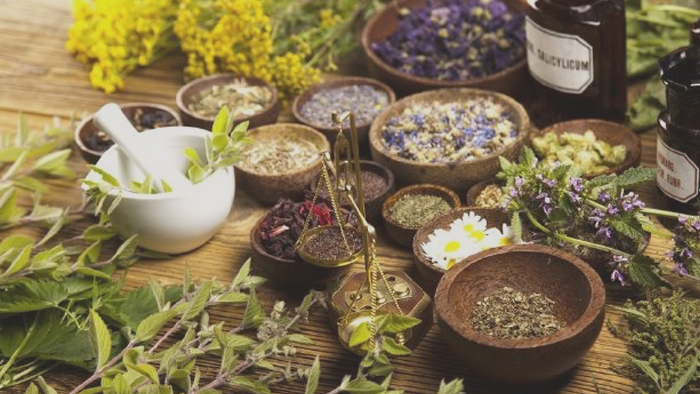 Hominids of the most remote times have treated themselves with plants. Traces of chamomile have even been found on the teeth of Neanderthal men who were known to be notorious carnivores. As a bitter plant without nutritive qualities, chamomile may have been consumed for medicinal/therapeutic reasons. In the wake of such a discovery, one could even consider hunter-gatherers to be the very first herbalists, unless, of course such traces might have derived from the rumen of the animals they consumed. On the other hand, what we are certain of is the rich plant pharmacopoeias of ancient civilisations, such as Sumerians, Aztecs, Ancient Egyptians and Greco-Romans as well as ancient-old traditional medical systems, such as the Ayurveda.

During the time of our parents and grandparents, the use of plants was ‘second nature’— and unavoidable. And so, until the middle of the twentieth century, it was quite common to see plants being sold on the streets. They too made up a great part of any good doctor’s therapeutic arsenal. Indeed, they were the go-to therapeutic remedies since the origins of mankind. However, following the Second World War, this all changed; an unprecedented industrial model was developed, with the incredible progress of synthetic chemistry. Virtually all chemical and bacteriological warfare industries (who produced mustard gas, Zyklon B, neurotoxic agents) have converted into post-war public health enterprises, becoming the giants of the pharmacy! The advent of synthetic molecules that took place in the wake of the indisputable progress in hygiene, health and nutrition, is one such example. Medications are the prodigal and cherished children of our time of unprecedented technological progress.

WHEN MEDICINAL PLANTS TOOK A BACK SEAT

It is important to point out that this phenomenon primarily concerns more ‘developed’ countries. Indeed, developing countries have not forgotten their multi-millennial tradition of using medicinal plants. During the last century, the abandonment of using medicinal plants for the benefit of drugs can be explained by the superior efficiency of the latter. However, the explanation for the complete shift from medicinal plant to chemical drug really depends on their differences. A medicinal plant is made up of a set of natural active ingredients whereas a chemical drug is a consequence of synthetic chemistry.

The first reason for this shift is that a natural active ingredient is not patentable by definition, at least for the time being. And so an industrialist will not lose their time or money for a product that is effective, but cannot be secured through an exclusive use for a given period. This is in fact an easy thing to understand: who would be crazy enough to spend an astronomical sum in order to validate a product that can be used by competitors? This also helps to explain the need for every manufacturer to invent a patentable original molecule to exclusively profit from, before it falls into the public market and is accessible to competition. It boils down to tinkering a molecule of vegetable origin in order to reap a notable return on investment.

In order to be authorised for the market, and validated as a treatment by the health authorities, a plant or drug must undergo successive experiments such as toxicology tests and clinical trials. The research, development and completion of a drug with a single active ingredient (a single synthetic molecule) and one that is to be sold on the market, requires several hundred million euros (between 200-800 million to be more precise!). Imagine for a moment the cost of a medicinal plant with several active ingredients. You would have to multiply this cost with the number of active substances present in the plant, plus the necessary study of the interactions between the different ingredients. It is therefore almost impossible for medicinal plants to attain a medical status. This fact alone could help to explain why they took a back seat during the twentieth century. As they were too complicated, too expensive to study and held no possibility of exclusive exploitation, medicinal plants have suffered from their great biochemical complexity and their non-patentability but certainly not from a lack of effectiveness with respect to medicinal effects, as many continue to believe! It is simply because they are too sophisticated for modern mass medicine that they have been largely abandoned. Neither the economic model nor the study model of the synthetic molecules is adapted to the medicinal plant.

The reference of our modern medicine derives from Pasteur’s vision of medicine, which can be summarised as follows:

This model solely focuses on a single active substance acting on various biological organisms. It is mainly a mechanistic simplification that was favoured by the development of prospective clinical studies and the production/dissemination of a standardised treatment, supposedly benefiting a large part of the population. Whatever the specialty concerned, this model of pharmacological treatment represents the basis of all reasoning and medical treatment in the West. Secondly, this model of thought induces and only promotes scientific research obscured by a monomolecular response to any pathology (a disease, a mechanism, a molecule). And from this point of view, both the drug excels in severe pathologies where its use remains indispensable, as it shows its limitations and weaknesses in benign and functional pathologies (e.g. spasms) or often its benefit with the occurrence of frequent and sometimes serious side effects. We are now only beginning to understand the dark side to these chemical drugs—which has been revealed in recent years with an increasing number of toxicities recorded (iatrogenicity). Lastly, this approach of treatment too often reduces the patient to the unique expression of their disease. This aggravates the dehumanisation of the medical environment regularly denounced. The pharmaceutical industry represents an outdated system that needs to be reformed. We are living at the end of the era of ‘all medicine’.

Above all, it is time to acknowledge the fact that medicinal plants have undergone a new skin during the past two decades and that they are revealing themselves to us in a new way. From this realisation, a new phyto-therapy model was born. Based on new approach of analysing the active ingredients of plants, known as pharmacognosy, this updated science has finally corroborated the allegations of traditional medicinal plants, discovered new ones and diverged from certain plants due to their toxicity. By bringing to light unpublished biochemical families and by categorising different properties of plant ingredients, plants have now even been attributed with new healing or prevention virtues. And with the rise of herbal medicine, these biochemical families are at the heart of foods that promote health (nutri-therapy). Moreover, in comparison with medicines reserved for a rich country, these plant resources, mostly of loco-regional origin, are often easy and cheap to produce. But the best is yet to come… medicinal plants have great pleiotropic effects, that is to say “simultaneous and positive multiple effects on our organisms”.

Take for example the case of turmeric—the cousin of ginger. Turmeric is widely-known as a simple spice of intense yellow colour which makes up the base of prized food preparations such as curry or chutney. Despite a traditional multi-millennial use throughout Southeast Asia, Indonesia and Africa, its association with health is largely unknown in the West. Thousands of studies focusing on its benefits have been published during the last 10 years. Its polyphenolic pigments, called curcuminoids, have revealed anti-inflammatory and antioxidant properties. They also prevent and treat so-called civilisation pathologies: cancer and diabetes as well as autoimmune, cardiovascular and neurodegenerative diseases. Yes—a single plant acts simultaneously on all these levels! And that’s not all. Turmeric actively supports all cells of the body with special mention for those of the liver. In this sense, it protects us from the attacks of the various pollutants of the petrochemical industry and the damage caused by radiation. All this and many other things with a lot of side effects low and benign … with a setback of 6,000 years!

The synthesis of 4,000 studies on turmeric reveals no less than 580 health benefits expressed by its polyphenols! It is simply amazing to understand the therapeutic potential that this small ochre tuber can offer us. It can even be said that in the light of all the publications, which attest to these positive properties on our health, not using the plant would either be an act of denial or of non-assistance to those sick. Some authors have estimated the pharmaceutical industry’s shortfall in the use of turmeric in replacement of drugs with equivalent effect… to $1 trillion. Not bad, for a plant that grows freely on the ground.

The case of turmeric might seem unique, but there are really many other examples out there. Cinnamon, rosemary and ginger are already on the trail of the now fantastic yellow root as scientific publications are gathering more information on them. Why absorb synthetic molecules that are very expensive to produce, that, at times, result in undesirable effects when there is often a proven, simple and risk-free plant substitute? In other words, medicinal plants undoubtedly provide us with a great alternative to chemical medicines for frequent benign situations, as well as the prevention of chronic pathologies. Based on a field-based approach, the well-managed use of medicinal plants thus regains a renewed interest in the general public and a strong scientific legitimacy in many medical indications at a measured cost.