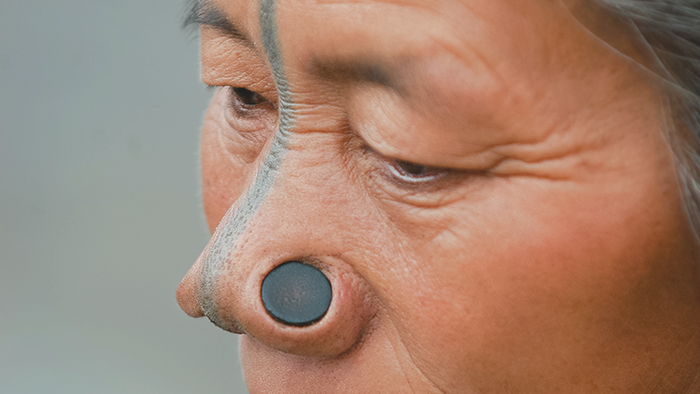 Posted at 14:36h in Beauty, History by admin

Nose piercing was first introduced to the Indian subcontinent by the Mughal Empire during the 16th century. Nowadays, a stud, phul, or a ring, nath, is generally worn in the left nostril, at times joined to the ear by a chain. The left side of the nostril, as believed by Ayurvedic medicine, is associated with the female reproductive organs and so, these nose piercings are believed to relieve childbirth pains as well as menstrual.

Elderly Apatani women of the Indian subcontinent’s northeast can be seen donning hug nose plugs known as yaping hullo, a unique beautification ritual no longer practiced among young Apatani women today. During the early centuries, big nose plugs were the ideal beautifying enhancements for an Apatani woman – having the largest meant being the most beautiful. These nose plugs were made from pieces of whole cane, available from their jungle landscape. The women first cut a piece of dry cane and smoothened its ends by burning and rubbing them against hard and smooth surfaces. This process also ensured the sterility of the material, avoiding any injury or infection to the nose.

The ancient Aztecs and Mayas of Central America, and Haida, Kwakiutul, and Tlinglit tribes of the American Northwest once practiced tongue piercing as a ritualistic activity. Tongues were pierced using a thorn and blood was collected in order to propitiate the gods and alter one’s consciousness.

Amongst the Dongria Kondh of the Niyamgiri hills in northeast India, ear piercing is practiced for protective purposes. The Dongria believe that evil spirits can enter the body through the openings of ears, and as they can be repelled by metal, wearing metal earrings prevent them from entering and causing harm to the body. Soon after they are born, Dongria girls have sixteen holes pierced in each ear and wear small silver rings. Besides these small rings, they also wear a brass/gold ear bolt, on the upper part of their ears, matched by a silver snake ring, nanguli, below. By wearing their nanguli earrings, Dongria girls will be protected from snakes entering their ears during their sleep.

Septum piercing was regularly practiced by the ancient Aztecs, Mayas and Incas. They wore a variety of jewellery, but jade and gold were the most popular due to their religious associations. The Cuna of modern day Panama continue this ancient practice by wearing thick pure gold rings in their septum.

In parts of northwest India, Nepal and Tibet, a septum pendant known as bulak is worn. In Rajasthan, some bulak being particularly elaborate and extremely large, prevent the wearer from eating, and so they need to be lifted during meals.

The use of septum tusks is quite prevalent in Irian Jaya, New Guinea and the Solomon Islands, with pig’s tusks being the most popular. Among the Asmat tribe of Irian Jaya, the most prestigious septum tusk is known as the otsj, a large bone plug that can be as thick as 25mm. They are usually made from the leg bones of a pig, however, at times, they are made from the tibia bone of an enemy slain in battle.

The Dogon of Mali wear lip rings, which symbolize the bobbin and shuttle the Nommo had used in their mythical weaving, all of which are connected to the notion of speech. For the Dogon women, wearing lip rings forms a ritualistic passage from childhood to womanhood. For instance, at the age of three, Dogon girls begin wearing a small ring on their lower lip, which comes to symbolize the introduction of speech.

Among the Surma and Mursi women of the Omo Valley in Ethiopia, lip piercing and the wearing of lip plates is a highly ritualised practice signifying womanhood, sexual maturity and marriage eligibility. The size of the lip plate may also indicate the amount that a woman’s suitor must pay for her hand in marriage, as the larger the plate the more cattle he will give to her family. Upon entering puberty, young Surma and Mursi girls pierce their lips and insert a small wooden stick in the hole. They are given a new identity and become a bansanai; a stage that indicates the passage from girlhood to womanhood. Over the course of a year, larger and larger wooden plugs are put in to stretch the lip, until finally the lip plate itself is put in, made from either wood or clay.

The Karankawa tribe, who once inhabited the Gulf Coast of Texas, pierced their nipples with small pieces of cane. In order to heal them, they applied a mixture of clay and alligator or shark grease.