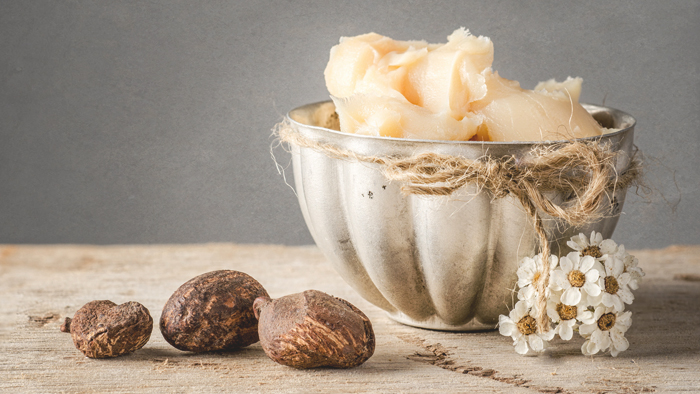 As an ivory coloured and smoky scented natural fat extracted from the nuts of the karite tree (Vitellaria paradoxa), Shea butter has been lauded for its many virtues. Its history as a precious and luxuriant West African commodity traces back to as early as Cleopatra’s Egypt, with records of caravans bearing clay jars of the valuable Shea butter.

West Africa’s relationship with Shea butter is intimate in nature. Its French name, karite, derives from Malian term ghariti, meaning the “tree of life” and accordingly, both the tree and its butter were seen as divine. It was the most fitting substance to accompany those to the after-life; the funeral beds of late West African kings and queens were carved up in the noble wood of the tree, while its butter was ritualistically coated over their bodies. As it was believed to encompass mystical powers, it was only women who were allowed to collect its fruits and nuts. Men were strictly forbidden to lay a hand on the tree.

Shea butter also formed a staple of West African healing and medicine and was also used as an effective insecticide. As for food, its oil has been used to prepare meals while its butter has also been used as a substitute for cocoa butter in the production of chocolate. In Nigeria, its leaves are eaten as a vegetable while its fruit is delicious and tastes similar to that of a fig.

And yet, among its many uses, Shea butter is most hailed for its cosmetic wonders. Here are 6 cosmetic uses by West African women:

Shea butter’s emollient properties render it an excellent moisturiser, particularly for those suffering from cracked and dry skin as well as eczema, psoriasis or other skin conditions. For West African women, Shea butter helps protect their skin from the harsh and dry Harmattan, (Saharan winds). New-born babies are even coated and massaged in Shea butter to protect their delicate skin from the extreme climate.

It is an also excellent skin regenerator, combatting skin “thinning” for better texture and restructuring skin cells against damages. Due to its regenerating properties, pregnant West African women use the butter to prevent stretch marks. Shea butter also helps alleviate sunburns. Filled with vitamin E, F, C and A, antioxidants that help to rejuvenate the skin against sun damages, its butter also acts a light sunscreen protection of 4-5 SPF.

As an anti-inflammatory balm, Shea accelerates the healing of wounds, bruises and sprains. It is rich in Omega 3 fats which calm inflammation and contains antibacterial properties. It is also known to alleviate rheumatism and so West African women use its butter in all forms of massage therapy.

West African beauties also use Shea as a hair balm. It is particularly effective for dry hair as it restores its flexibility and vitality. When applied on the scalp, it also nourishes the skin and thereby helps in alleviating dandruff.

When mixed with citrus juices such as lime, Shea butter works as an effective antiperspirant, helping to reduce body odour and impart a sweet-swelling fragrance.