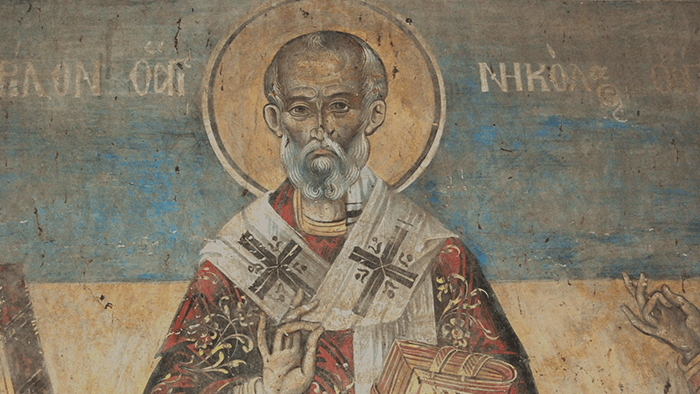 05 Dec The Tradition of St. Nicholas Day Around the World – December 6th

Many people know St. Nicholas by the name Santa Claus. And yet while the modern figure of Santa derives from St. Nick, you’d hardly find this patron saint of children making toys in the North Pole.

So Who Was St. Nicholas?

The real man behind the fictitious modern day Santa Claus was St. Nicholas of Myra. Born in 280 C.E. in Asia Minor, he lost his parents at an early age, though they left him great wealth when they died. He was known for giving anonymous gifts to help those in need and was eventually made a bishop. The good bishop died on December 6th; and so this day is now known as St. Nicholas Day.

Why the Gift Giving?

The history of leaving shoes or stockings out for St. Nicholas likely stems from the story of him leaving small bags of gold for a man and his three daughters. During those times women had to bring a dowry to a marriage in order to find a good husband. St. Nick heard of a man who had three daughters but could not afford the dowry. Without it, the daughters would most likely enter a life of prostitution instead of being able to marry. According to legend, St. Nick threw three bags of gold through their window at night, saving them from a life at a brothel and cementing his place as the patron of gift giving.

St. Nicholas Day Around the World

The feast of St. Nicholas is celebrated around the world in various cultures. Our own family tradition is a hybrid of several cultural traditions related to St. Nick.

This is how some cultures around the world remember this day:

In Greece (as well as Albania, Serbia, and Bulgaria), St. Nicholas is celebrated on the eve of his feast day, December 5th. This day is known as Shen’Kolli i Dimnit (Saint Nicholas of Winter). In these cultures, this day is one of fasting, not gift giving. In fact, on this day, most people abstain from meat or fast completely or prepare a feast to eat just after midnight.

In these countries, children leave their boots in front of the fireplace for St. Nicholas. Often, they include a carrot or a treat for his horses, as legend has it that he arrived with his horses via sleigh or steamboat in these areas.

In France, St. Nicholas arrives on December 6th and gives children small gifts and chocolates. In the weeks leading up to this day, parents and grandparents tell stories of the legend of St. Nick, including a disturbing but popular one. The story goes that three children wandered away and got lost. A butcher lured them into his shop where he killed them and salted them away in a large tub. According to legend, St. Nicholas revived the boys and brought them home to their families. (At least there’s a happy ending!)

This story earned St. Nicholas his reputation as protector of children in France. The butcher (known as Père Fouettard meaning ‘Father Whipper’) is imagined to follow St. Nicholas in penance and leave lumps of coal or even whip misbehaving children. In France, statues and paintings often portray this event, showing the saint with children in a barrel.

Sankt Nikolaus and Krampusnacht in Germany and Austria

The way our family honours St. Nicholas mainly centres on this tradition. In Germany and Austria (and some other countries in this region), children leave out a boot for St. Nicholas and receive small toys, coins, or candy. In these areas, St. Nicholas still dresses like a bishop and often is portrayed on a horse. Like the French story, a sinister companion accompanies St. Nick, in this case the even more terrifying demon-like Krampus.

In these areas, they don’t mess around with an Elf on the Shelf to encourage kids to be good: they invoke the legend of the Krampus! This beast is thought to punish children who misbehave and to capture particularly naughty children in his sack and carry them away to his lair. The Krampus has roots in Germanic folklore and its influence has spread to Austria, southern Bavaria, South Tyrol, northern Friuli, Hungary, Slovenia, the Czech Republic, the Slovak Republic, and Croatia.

December 5th is known as Krampus Night, or Krampusnacht, in which the hairy devil appears on the streets. Traditionally young men dress up as the Krampus on the night of December 5th and roam the streets frightening children with rusty chains and bells.