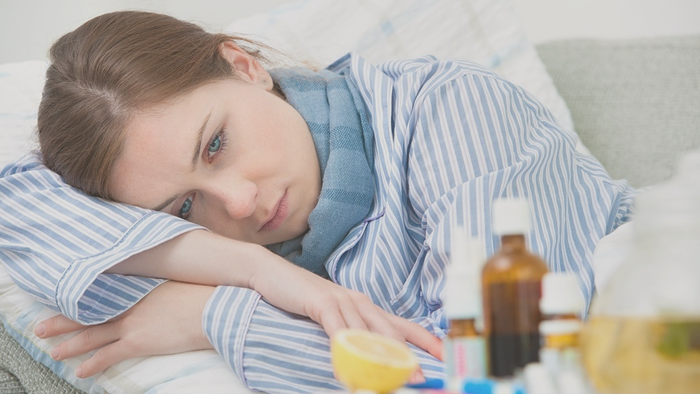 Acute bronchitis, a short-term inflammation of the bronchi, is caused by the rhinovirus, which dwells in the nose as its name indicates (rhino, meaning ‘nose’ in Greek). The virus reproduces in the nose before descending into the throat and trachea, and then into the bronchi. The mucous membranes then begin to swell and the goblet cells then produce mucus.

Acute bronchitis generally lasts up to a week and can be treated by natural means. However, you must see a doctor if you experience shortness of breath, coughing blood, have a fever exceeding 39°C, and if your symptoms have not improved after a week.

To begin with, it is very important to drink up to two litres per day of fluids. This is because the more hydrated you are, the easier it is for you to get rid of your bronchial secretions. Additionally, warm fluids will also help to soothe your throat. Herbal teas are a great remedy, particularly those with eucalyptus, anise, fennel, liquorice, hyssop, myrrh, elder, verbena and thyme, which are recommended in case of bronchitis, as they all have an expectorant effect.

Harness the Power of Thyme

Thyme works not only as a fluidizer, but also as an anti-inflammatory. Breathing in the essential oil of thyme will help in dissolving mucus and will also accelerate the process of expectorating. We recommend adding a few drops of thyme essential oil into a large bowl of hot water, or simply infusing thyme sprouts in simmering water. Cover your head with a towel and breathe in the mist for about 15 minutes.

You can also make yourself a special anti-bronchitis thyme-based potion! First off, mix 30 grams of thyme with 15 grams of dried plantain and 10 grams of liquorice root. Place these herbs in 1 litre of simmering water and let them infuse for about 10 minutes. Filter and drink the mixture 3 times a day.

In addition to acting on symptoms, it is equally important to fight the virus that causes bronchitis. Mustard oil is a natural antibiotic that not only helps in fighting off bacteria but viruses as well, and can go a long way in preventing them from multiplying. You can find mustard oil in horseradish and nasturtium (nasturtium is a plant found in many gardens – its leaves and flowers are known for their healing effects), as it is a glucosinolate, a characteristic component of plants of the Cruciferae family (cabbage, radish) as well as tropaceolaceae (nasturtiums).

In 2005, researchers from the Institute of Environmental Medicine and Hospital Hygiene at the University of Freiburg, Germany, discovered that mustard oil from horseradish and capuchin had an effect against all 13 pathogenic germs (the causes of diseases) they had tested. The research demonstrated their efficacy against rhinovirus, the most common cause of acute bronchitis.

Horseradish works as a mild natural antibiotic. It helps your body get rid of mucus, which, when stagnant, can become the breeding ground for bacteria that causes serious infections. Horseradish thins the mucus, which makes it easier to cough it out. Initially, the mucus production might increase, but this is a good sign as it means the body is cleansing.

Finely grate a fresh horseradish, spreading it on a cotton cloth with its corners folded. Then lie on your back and apply the horseradish pad to the top of your chest, where your bronchi are inflamed, for about 10 minutes. If you experience a severe burn, remove it immediately.

Mix 1 tablespoon of freshly grated horseradish with 3 tablespoons of honey, and let the mixture sit for a few hours. Take a teaspoon of this mixture, and keep it in your mouth for a few seconds before swallowing it. Repeat this three times a day, and until the inflammation decreases.