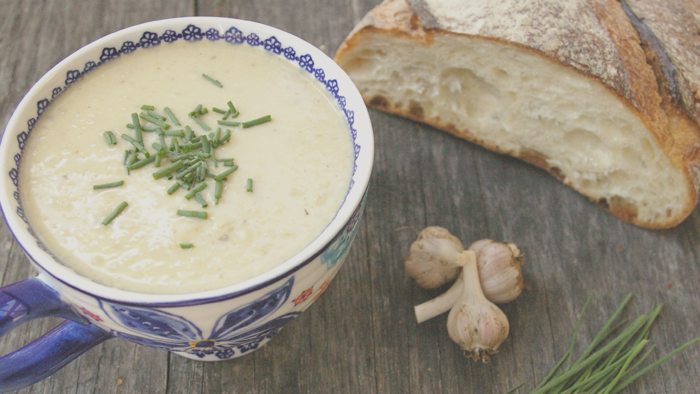 A simple way to boost your immune system is to be generous with herbs, spices and condiments in your kitchen.

Many cultures around the world, including African, Caribbean, American, Chinese, Indian, Eastern European, have always made extensive use of spices, and for good reason too! Herbs and spices are a simple way to season and flavour food whilst also increasing its nutritional and therapeutic qualities.

Garlic, in particular, is popular due its healing properties, especially against infectious diseases such as colds and flu. This is due to the stimulating effects it has on our immune system.

Fresh garlic is a powerful anti-bacterial, anti-viral and anti-fungal. Known by its scientific name Allium sativa, it has been historically valued for its ability to fight off viruses and bacteria. Ancient medical texts from Egypt, Greece, Rome, China and India, each prescribed their own medical applications for garlic.

The ancient Egyptians recommended it as a powerful remedy for 22 diseases and according to a papyrus dating back to 1500 B.C.E., the builders of the great pyramids consumed it in order to increase their stamina and maintain their health. In ancient Greece, Hippocrates, the Father of Medicine, used garlic as part of his therapeutic armamentarium, advocating its use for pulmonary complaints, as a cleansing or purgative agent, and for abdominal growths. In ancient Rome, the chief physician of Nero’s army recommended garlic to ‘clean the arteries’, i.e. to improve cardiovascular status while in ancient India, the medical text, the Charaka-Samhita, explains how garlic should be used to treat heart disease and arthritis. Since the Middle Ages, garlic has also been used to treat wounds. It was either crushed or sliced, and applied directly onto the wounded areas in order to prevent infection (gangrene) from spreading. During the Renaissance, leading physician of the 16th Century, Dr. Pietro Mattioli of Siena, prescribed garlic for digestive disorders and kidney stones.

The natural medicinal encyclopaedias attributed an impressive number of therapeutic properties to garlic. Ultimately, garlic has been an effective remedy against antibiotic-resistant bacteria; it reduces the risk of heart disease, including heart attack and stroke; it normalises blood pressure and cholesterol; protects against several forms of cancer, including brain cancer, lung and prostate cancer, and reduces the risk of osteoarthritis.

It is believed that much of the therapeutic effects of garlic are due to its sulphur compounds, such as allicin, which gives it its characteristic odour. However, garlic also contains oligosaccharides and proteins rich in arginine, selenium and flavonoids.

Fresh garlic should be crushed or finely cut in order to release as much alliinase as possible. Alliinase is an enzyme that catalyses the formation of allicin, which in turn will form different organosulfur compounds. To ‘activate’ the medicinal properties of garlic, you must first crush its cloves before consuming it!As allicin is destroyed after an hour of being released, garlic pills and dried garlic powder will not be of much help to you – so just remember, opt for fresh garlic instead! One or two medium-sized cloves are generally sufficient and are tolerated by most people.

In order to boost your immune system on the eve of the season of cold and flu, here is a simple (medicinal) recipe to make!

For four persons, you will need:

Step 1: Preheat the oven to 175 °C and place the 26 unpeeled garlic cloves in a small glass dish. Add 2 tablespoons of olive oil over the cloves and sprinkle them with sea salt. Then, cover the baking dish tightly using a greaseproof paper and cook until the cloves are golden brown and tender for about 45 minutes. Let them cool. Once cooled, press the garlic between your fingers to release the cloves from their peels and place them into a small bowl.

Step 2: Melt butter in large saucepan over medium-high heat, adding onions, thyme, ginger, powdered cayenne pepper and cook until the onions are translucent for about 6 minutes. Then add the roasted garlic together with the 26 peeled, raw garlic cloves and cook for 3 minutes. Add some vegetable broth, and cover and simmer until the garlic is tender for about 20 minutes. Mix the soup until it is smooth.

Step 3: Pour the soup into a saucepan, adding coconut milk, and leave it to simmer. Season the soup with sea salt and pepper. Then, squeeze the juice of 1 lemon into each bowl and serve.

This garlic soup can be prepared a day in advance, just remember to cover and refrigerate it. When warming it up, be sure to do it over a medium heat, stirring it occasionally.

If you have a cold, you don’t need any medication! Simply just stay warm, take naps, avoid sugar, and drink a bowl of soup with garlic! You can also take vitamin D (5000 IU daily) to plump up your immune system. You will heal in a few days and significantly reduce your risk of falling ill again.