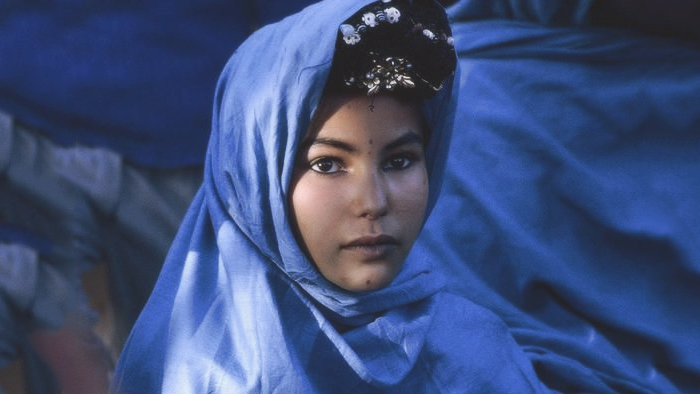 Riding astride on magnificent camels through the harsh Saharan desert, the Tuareg are masters of the vast realm, which has earned them a near-mythic reputation. They guard their secrets of survival jealously. As nomadic herders, they navigate through the desert dunes that rise and fall, by the colour, texture and taste of the sand throughout the day and by the stars at night. Throughout the medieval ages, countless generations of Tuareg dominated the lucrative West African caravan trade in gold, perfumes, spices and slaves that crisscrossed the barren landscape of the Sahel ‘the Shore’ of the Saharan desert.

As wanderers constantly on the move and with only a few possessions in hand, the Tuareg place great important on their appearance which serves, in essence, as a cultural and unique identity. The ideal beauty of a Tuareg woman is praised in their poetry, often depicted with endless black braids, soft skin, shiny teeth, dark eyes, blackened gums, slender hands and feet, and a pleasant body with ‘rolls of fat’. The Tuareg particularly praise voluptuousness, as they believe it transforms a Tuareg girl into a woman – physically, emotionally and spiritually. It too demonstrates their health and hence fertility.

Here are five beautifying rituals of the Tuareg women.

For the Tuareg, the head, eghef, is the seat of intelligence, whilst hair, is considered the outer manifestation of intelligence. They praise luxuriant and intricately braided hair, which they associate with pure and noble origins. Extremely unkempt hair, that is untrimmed, matted and at times carelessly wrapped in headdresses, Tuareg women identify with insanity. As shampoo, they use a range of natural extracts sourced from their Sahelian and Saharan landscape in order to keep their hair clean, their scalps hygienic and free from lice. By infusing the crushed leaves of talekkodt (black benniseed) or deje (white raisin tree), or ataghantagh (Rogeria adenophylla), they produce hair cleansers. As a hair tonic, they use camel urine, which perfumes their hair, leaving it glossy, lustrous and thick while also preventing dandruff. Some Tuareg women even use it as a hair lightener. When it comes to art of Tuareg hairstyles, such rituals consist of firstly rubbing and coating the hair with a mixture of aromatic pomade and fine black sand to enhance its lustre before intricately braiding it into a number of different intricate hairstyles.

When highlighting their eyes, Tuareg women use both eyeliner and eye shadow. As an eyeshadow, they apply tahijjart, the fragrant juice from the fruit from the gum Arabic tree. As eyeliner, they scratch or ground tazolt kohl stone into powder. They then line their eyes with the kohl using a bronze pin, to decrease the glare of shimmering sands and to sharpen their vision.

As a skin moisturiser, Tuareg women apply desert date oil, extracted from seeds, which they collect from the Sahelian dry lands. Known as taboraght, the oil clears up any skin irritations they may have, while its leaves, when crushed into a paste, is used to combat sunspots. Another oil Tuareg women use is from the seeds of the chinee tree, which is known as tabakat.

Tuareg women believe they hold the power to overcome, not only unpleasant odours, but evil spirits, disease and misfortunes. In essence, aromatic agents, for the Tuareg women, work as cosmetic and protective amulets. Such scents also play an important role in ritual ceremonies. For instance, during weddings, incense is passed around a circle of guests to perfume their clothing and drive away jealous spirits. They are also burned profusely outside the tents of new-mothers and babies. The resin of African myrrh, known as adaras, is used as both a sensual aromatic fragrance by Tuareg women. It is also an insect repellent and wound disinfectant. Tuareg women crush the dried flowers from the aromatic and aphrodisiac flowers oftajalalt, (Mitragyna inermis) and mix it with another fragrant powder derived from the bark of the shittah tree (Acacia seya). Similar to talcum powder, this fragrant powder is particularly favoured by pregnant women.

Tuareg women tint and decorate their hands and feet with designs sourced from anhalla, the henna plant. The Tuareg women believe that the henna plant, along with its application in artful designs, hinder the evil eye and prevent the attack of evil spirits. It is similarly protective in that it acts an as anti-fungal disinfectant.